Ralph Schlosstein has spent his career in the big league. After completing his Master’s in Public Policy at the University of Pittsburgh, he walked into an economist role in the Congressional Joint Economic Committee under the Ford administration. Under President Carter, he became the Associate Director of the White House Domestic Policy Staff. From there, he joined Lehman Brothers, where he was a Managing Director in investment banking. He then founded a company with a friend: that friend was Larry Fink and the company they founded was called BlackRock. For over two decades, they worked side by side, Larry as CEO and Ralph as President, growing it into the world’s largest asset manager. And yet, despite all he had achieved, there was still a niggling feeling that there was space for one more career challenge.

The year was 2009, and with the aftershocks of the global financial crisis (GFC) still being acutely felt, Brad found himself hot property. "I was an untainted financial services executive, which made me an endangered species," he jokes. Plenty of opportunities came his way but the big question for him was which was the right one. "The job I accepted was actually the smallest company I was offered the CEO role of," he says.

Bead had a hunch that, in this post-GFC world, it might just be possible for David to match up with Goliath. "My hypothesis was that one of the investment banking boutiques, of which Evercore was one, could scale and maybe break out to become a global independent investment banking advisory firm," he says. He signed on the dotted line to become President and CEO, a role he held until becoming Co-Chair and Co-CEO with John Weinberg in 2020.

We’ve been number four in the world in advisory revenues for the last four years, behind Goldman Sachs, Jp Morgan and Morgan Stanley.

In February 2022, Brad stepped away from the C-suite into a Chair Emeritus role, leaving John as the Chair and CEO. His hunch proven correct, today he can reflect on the last 13 years as a period of significant growth and robust financial performance. "We’ve been number four in the world in advisory revenues for the last four years, behind Goldman Sachs, JP Morgan and Morgan Stanley," he says. Long-term highlights include the 17-fold growth of total adjusted net revenues from US$194 million in 2008 to over US$3.3 billion in 2021. Advisory revenues have grown 15-fold to over US$2.7 billion.

Beyond the financials, Brad is "extremely proud" that the firm is now global. "In 2008, roughly US$5 million of our US$178 million of advisory revenues were from clients outside of North America," he says. "Over the last four years, roughly a third of our revenues have come from clients outside of North America, particularly from Europe and Asia."

The company has also greatly expanded its capabilities, growing from a mergers and acquisitions and restructuring firm into a leader in activist defense, corporate restructuring, debt advisory and equity advisory. "We are able to advise our clients on almost anything they want to do strategically or in capital markets," Ralph says. This scope also brings advantages to the recruitment space. "John and I can confidently sit in front of any recruit and assert that they can do significantly more business with their clients at Evercore than at any other independent firm," he says.

John and I can confidently sit in front of any recruit and assert that they can do significantly more business with their clients at Evercore than at any other independent firm.

On the topic of talent, Ralph enthuses how the firm has become a "talent development machine". "We have been on a journey from a firm that grows and sustains itself primarily by hiring other people’s talent to one that hires, trains, develops, mentors and promotes its own talent," he says. In the past year, the number of internal promotions was almost double the number of external hires. "We have worked hard to have the most diverse and inclusive firm in our business, including the fact that three of our 10-person Management Committee today are women."

As Ralph looks forward to being part of its future success in his new role, he says that Evercore has grown into a firm "that is truly a trusted adviser to the largest companies and private equity firms in the world, and that we will always do that in a way that is completely confidential and without any conflicts". Under John’s leadership, he is excited about what the firm can achieve next. "John is deeply skilled at our business, a superbly fine human being and fully trusted by both clients and our team. With him at the helm, I could not be more optimistic about the future prospects for Evercore." 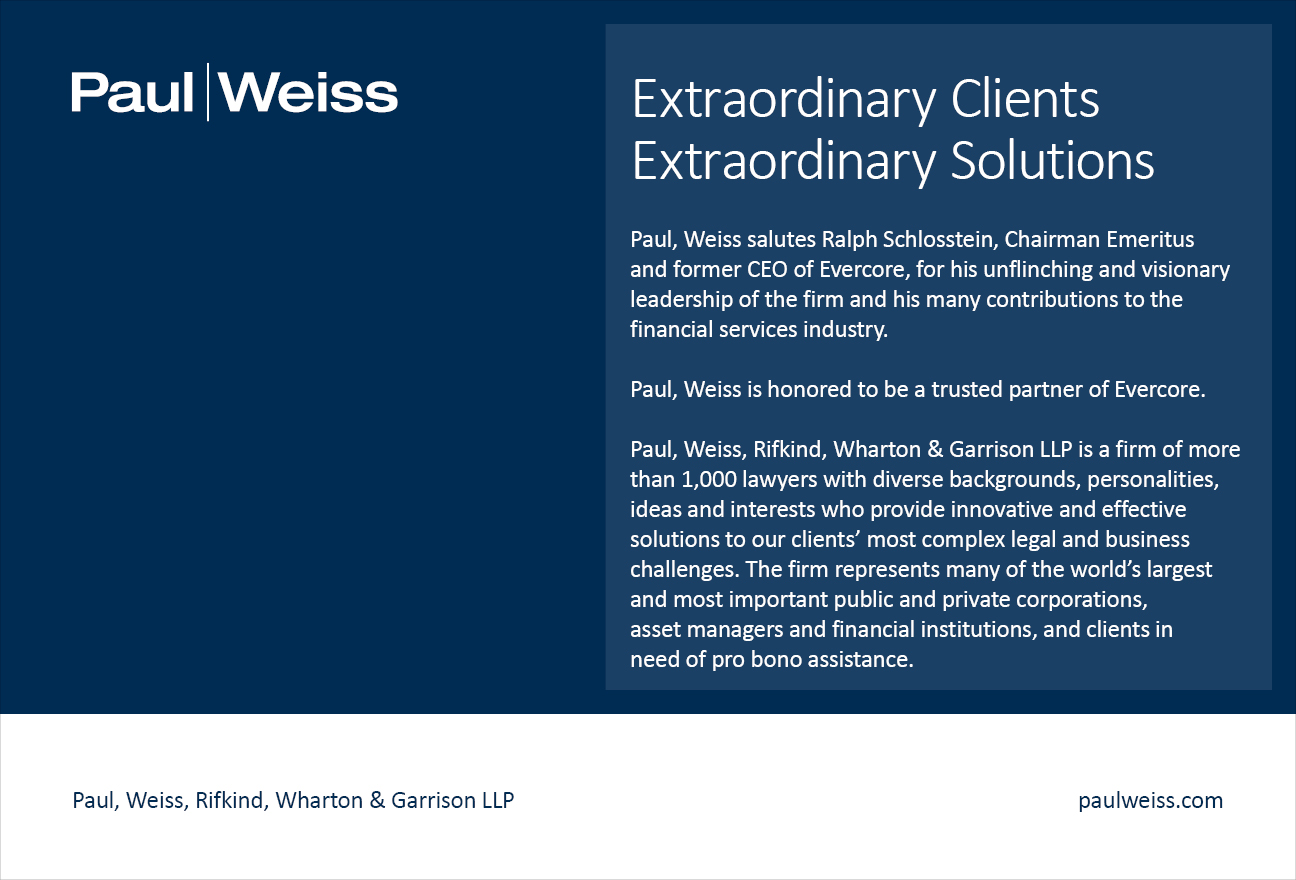 By Chrissie McClatchie
After a decade working in sales and marketing for the luxury industry in the South of France, Chrissie shares her journalism talents with The CEO Magazine.
Related Articles
Inspiring The Business World
The CEO Magazine is more than a business title; it’s a source of information, inspiration and motivation for the world’s most successful leaders, executives, investors and entrepreneurs. Our content creates conversations, our voice is the one that matters.