Chennai International Airport is always on the lookout to improve passenger convenience by adding new features and providing best-in-class service.

"The business is already there," explains Airport Director Sharad Kumar. "We already have huge traffic. We have to make our infrastructure line up with the available business."

A veteran in the field of civil aviation, Kumar has more than three decades of experience. During that time he held the role of Airport Director at Bhubneshwar and Srinagar International Airports.

"The idea has been to enhance the capacity, both on the terminal side, as well as the air side," he says. The Indian government has announced the site of the greenfield airport will be Parandur, which is 59 kilometers outside of Chennai.

To make matters more complicated, there is very little room to play with. "We’re trying to make optimal usage of the land made available to us by the state government," he explains. "Hardly 1,300 acres [526 hectares]. That is the smallest in our country to run a metro airport."

We’re trying to make optimal usage of the land made available to us by the state government.

Working within these parameters, a strategy was set. "We decided to dismantle the old buildings and reclaim the land after demolishing them and make a new, integrated terminal," Kumar says.

To make sure that existing operations were not interrupted, a plan was sketched out to allow for all international traffic to shift to Terminal 3 as work was carried out on the site of Terminal 2. Once the new terminal is operational later this year, it will take over as Terminal 3 is then dismantled.

The new facilities are projected to increase the airport’s capacity to welcome 16 million international passengers alone. "Then Terminal 4, the existing international terminal, will be converted to a domestic terminal," Kumar explains.

The move, which will see it join Terminal 1 for internal flights, should increase capacity on the domestic front by an additional six million passengers.

"Combined, we will jump from 17 million to 35 million overall," he says. "That will give an enormous boost to the traffic that we are going to have."

Alongside the infrastructure works, operational enhancements are also underway to complement the predicted increase in terminal capacity. In July 2022, the airport’s main taxiway, Bravo, reopened after a curve, which caused certain restrictions, was straightened.

"Now the aircraft speed will be good enough to clear the taxiway quickly, which will increase our runway capacity so that more aircraft, and therefore more passengers, can be accommodated in one hour," Kumar says.

As they prioritize rapid exit taxiways (RET), or runway exits angled in such a way that aircraft can maintain higher speeds, three other taxiways are in the works. The first, called Charlie One, is already operational. "That’s a big relief and is already helping us augment the number of aircraft we handle," Kumar says. Two more, RET-1 and RET-2, are under construction and are set to be commissioned this year.

Unlike places where there is clear-cut, virgin land available, this is a brownfield project, a working airport with all sorts of lines and cables passing through.

"We are also increasing the boarding gates with the integration of the Multiple Apron Ramp System (MARS), a parking management system that allows us increased flexibility with the configuration of our gates," Kumar says.

On the land side, a new multilevel car park will cater to 2,100 cars at any given time – almost doubling the existing capacity of 1,200 vehicles. And, once inside, passengers will find extra ease in moving around, with clear signages and updated food, beverage and retail offerings.

Even the setting hasn’t been overlooked as AAI aims to create the airport of tomorrow to serve India’s fourth-largest city.

"After the reconfiguration of the car park, we’ll have 15 extra acres [six hectares], which we will convert into hard and soft landscape areas to really change the feel of the airport," Kumar explains. "You’ll find a lot of greenery, gardens and fountains."

Undertaking major construction while keeping the airport operational brings with it a distinct set of challenges. "It’s very complicated," Kumar admits. "Unlike places where there is clear-cut, virgin land available, this is a brownfield project, a working airport with all sorts of lines and cables passing through. Once you touch them the whole operation will come down."

The space limitations manifest in other ways as well. "The airport is so crammed, there’s no place to keep the material. Plus, everything is so tight, with vehicles and aircraft always on the move, that keeping an incident-free working area is in itself a very big challenge," he explains.

Yet such obstacles haven’t blurred the bigger picture: "We would be able to meet a capacity of 60 million should we need to," Kumar says. "All those plans are in the pipeline and when it’s required we’ll keep on implementing them.

"For instance, while currently a second runway is only ever used when the main one is closed for maintenance, work is underway to allow simultaneous take-off along both runways. Landings will continue to be reserved for the primary runways."

It’s taken an enormous amount of planning and effort to execute but Kumar is excited for passengers to enjoy the updated facilities and benefit from the latest in airport technology. "We are associated with the best of all in the world," he says.

Automation, in particular, is driving a lot of improvements to the passenger experience. "We have an app coming that will allow you to find your boarding gate, food and beverages, retail and duty-free from the moment you enter the airport," he explains. "You’ll even be able to organize deliveries to your boarding gate."

From the beginning, it’s been about ensuring the passenger experience is nothing but comfort and convenience – and whatever small glitches or shortfalls there are, we’re working on fixing them.

Plus, the new international terminal has been designed so that, should there be a lull in flights coming in from overseas destinations, part of the building can be given over to ease congestion on the domestic arrivals and departures front.

If there’s a common thread driving Kumar, it’s offering a service with a smile. "So many people come to me after visiting international airports and tell me about their horrible experiences," he says. "But people should feel happy after they visit Chennai International Airport. It’s in the heart of the city and well connected by the metro.

"From the beginning, it’s been about ensuring the passenger experience is nothing but comfort and convenience – and whatever small glitches or shortfalls there are, we’re working on fixing them." 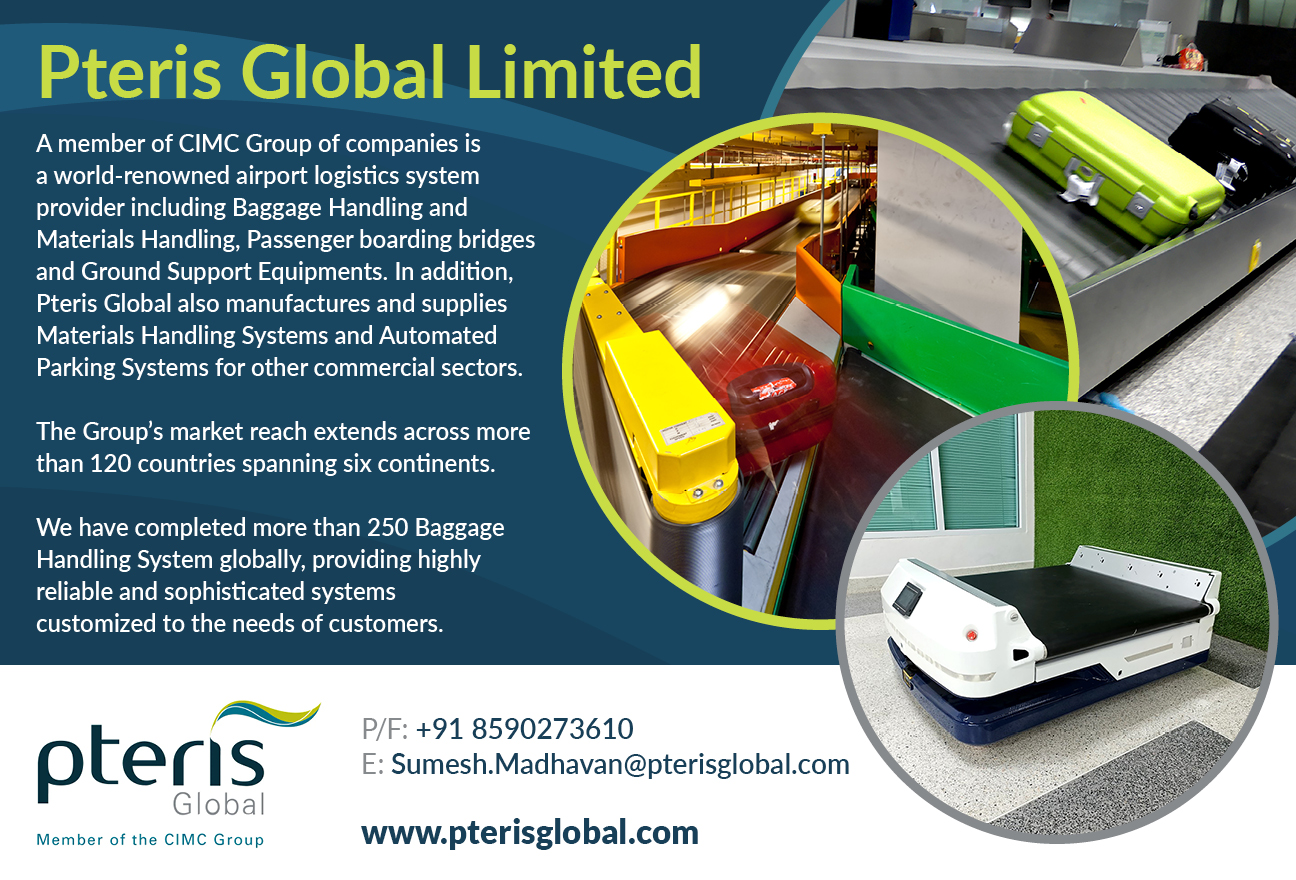 "PGL has had a longstanding relationship with the Airport Authority of India for more than 25 years, successfully executing multiple projects across India. This includes PGL being awarded Chennai Airport BHS Works Phase II in October 2019." – Sumesh Madhavan, Project Manager, Pteris Global Limited
By Chrissie McClatchie
After a decade working in sales and marketing for the luxury industry in the South of France, Chrissie shares her journalism talents with The CEO Magazine.
Inspiring The Business World
The CEO Magazine is more than a business title; it’s a source of information, inspiration and motivation for the world’s most successful leaders, executives, investors and entrepreneurs. Our content creates conversations, our voice is the one that matters.