Within an hour, maximum two, ExecuJet Haite Aviation Services China General Manager Paul Desgrosseilliers had made the decision to uproot his life and career from the US for China in 2009. "I went in for an interview and left having committed on the spot to moving," he tells The CEO Magazine. "One month later, I was on the ground."

Now, 13 years on, and today based in Tianjin, he can comfortably reflect on the speed at which everything happened. "It’s probably the only way to do it," he says with a smile. "While today I’m just as excited about the country as I was on the first day I arrived, I think if I had been given a lot of time to think about it, I would probably have come up with 101 reasons not to go."

Paul had been intrigued by China ever since a business trip took him to the country for the 2008 Beijing Olympics, just like he’d been hooked on aviation since a young child. "I’ve been fascinated by flying for as long as I can remember and the only aspiration I’ve ever had was to work in the industry," he recalls. He quickly found his niche in business aviation.

Paul – who also holds the roles of Treasurer, Board of Directors at Asian Business Aviation Association, and Chairman of the Board of Metrojet Haite, Joint Venture – has been with ExecuJet Haite Aviation Services as General Manager since 2013, a time when the ink had barely dried on the joint venture agreement between Switzerland’s ExecuJet Aviation Group and China’s Haite Group. "We’ve gone through a number of changes since," he says of the dedicated business jet maintenance, repair and overhaul (MRO) organisation.

Most significant was in 2016, when ExecuJet decided to exit its shareholding in the joint venture (the company has since been purchased by Dassault Aviation). And while the ExecuJet name is still officially maintained – and the relationship between the two continues to be what he describes as "great" – ExecuJet Haite Aviation Services is fully owned by the Haite Group.

It was very challenging to build the necessary infrastructure and find the right people and develop them, especially in China where business jets were still so new.

The early days were a steep learning curve, Paul admits, even if he had a few years’ worth of local connections behind him. "It was very challenging to build the necessary infrastructure and find the right people and develop them, especially in China where business jets were still so new," he explains.

"We’ve needed to apply for a lot of licences and maintain and grow the relationships we had with the original equipment manufacturers (OEMs)."

Along the way, he’s been careful to flex and mould into the local culture, rather than make it fit his way of management. "We’re still very much a Chinese company in the way we operate but we employ many Western management techniques," he says. "I know it works well because I’ve seen the development of our staff, and I’m quite proud of that."

The business is now reaping the benefits of all the hard work Paul and his team continue to put in. "We’ve enjoyed double-digit growth every year and have now been profitable for five years, even for the past two years and the challenges that the COVID-19 pandemic has brought," he reveals.

Currently, it represents OEMs such as Dassault and Embraer, Rolls-Royce on engines and Honeywell on auxiliary power units and avionics. "We also work on Gulfstream and Bombardier," he adds.

And it’s this positioning as a fully internationalised facility that operates in China that has become the company’s unique selling point. "Our reputation is truly second to none for a Chinese domestic MRO," he says.

Along with "presenting higher than international levels of service", Paul gives high praise to the technical team. "Our engineers are extremely intelligent with an enormous work ethic. They work hard, they work until the job is done," he says.

But they are also rewarded for their efforts. "We treat them well and they enjoy coming to work every day."

Our reputation is truly second to none for a Chinese domestic MRO.

Paul has been in executive management long enough to learn that culture is the most important asset of a company. "It’s also the strongest market advantage I have because all our competitors in China have access to enormous amounts of capital," he says.

However, he also knows that no amount of money can create the culture that has been cultivated at ExecuJet Haite Aviation Services; one that’s focused on safety, professionalism and quality of work. "That takes time, the time to have people in place to absorb it, learn it and live it," he asserts.

And when customers come to its facilities, they can feel that culture as soon as they walk into the building.

ExecuJet Haite Aviation Services is now positioned for even further growth with the June 2022 acquisition of Shenzhen-based aircraft management and charter services company Funian Aviation, operators of a fleet of Gulfstream aircraft.

"We’re moving into the world of being an operator, by acquiring an Air Operator Certificate," Paul explains.

The purchase has been made in a joint venture with Hong Kong business jet operator Metrojet, owned by the Kadoorie family who also maintains a controlling interest in the Peninsula Hotel Group. For Paul, the partnership is a "great match".

The two companies also have similar heritage, both highly successful family run operations with a passion for aviation. "We’re completely aligned, with the same goals in terms of quality, safety and how we’re going to run our businesses," he points out.

For Metrojet, the joint venture marks a major foray into the Chinese market on the flight operations side, although the company has been a leader in aircraft management and charter, maintenance and consultancy services based in Hong Kong, since 1997.

"They bring a lot to the table and, as a maintenance company, we are excited to learn the business of aircraft management from them," Paul says.

ExecuJet Haite Aviation Services’ local understanding and experience in the domestic landscape will prove invaluable as the new venture looks to build a portfolio of high-net-worth individual and corporate-owned business aircraft under its management.

It’s the right time for us to become an operator and we’re looking forward to bringing something new to the market.

Paul says that the timing couldn’t be better. "It’s the right time for us to become an operator and we’re looking forward to bringing something new to the market," he reflects.

And while China still has a way to go when compared to a mature business aviation market such as the US (there are thousands of business jets in the US today, compared to just hundreds in China, he explains), he predicts an influx of incoming private jets over the next few years, especially as business travel makes a return.

There’s no doubt he’s had ups and downs to navigate, but if Paul was to offer tips for building a successful business in China, like has been done with ExecuJet Haite Aviation Services, he believes adaptability and persistence are key.

"China’s a roller-coaster and every day is a challenge," he says. "The customer’s needs are always changing – what they want today is going to be different next week, next month and next year.

"We’re quick and we’re flexible because that’s what the market dictates, and you simply have to be if you’re going to succeed here."

Paul says the vision and commitment of Haite Group’s Chair Li Biao to ExecuJet Haite Aviation Services is one of the primary reasons he loves his job. "He is a really strong supporter of the business and where we’re going, which is why I really enjoy my role," he says.

Founded in 1991 by Li’s father, Li Zaichun, the Group has interests across a wide spectrum of aviation activities. Subsidiary businesses include Sichuan Haite Hi-Tech, with operating segments such as research and development (R&D) of aircraft avionics, ground testing equipment and flight simulators; microelectronics – the R&D and manufacture of semiconductor chips; aviation training, including pilot and flight attendant training; aviation leasing; and aviation maintenance. "Acquiring the well-established Funian Aviation with the Haite Group is an incredible opportunity. This partnership further leverages what both Haite and Metrojet have been doing well in our respective lines of aviation business in the Greater China region." – Gary Dolski, CEO, Metrojet 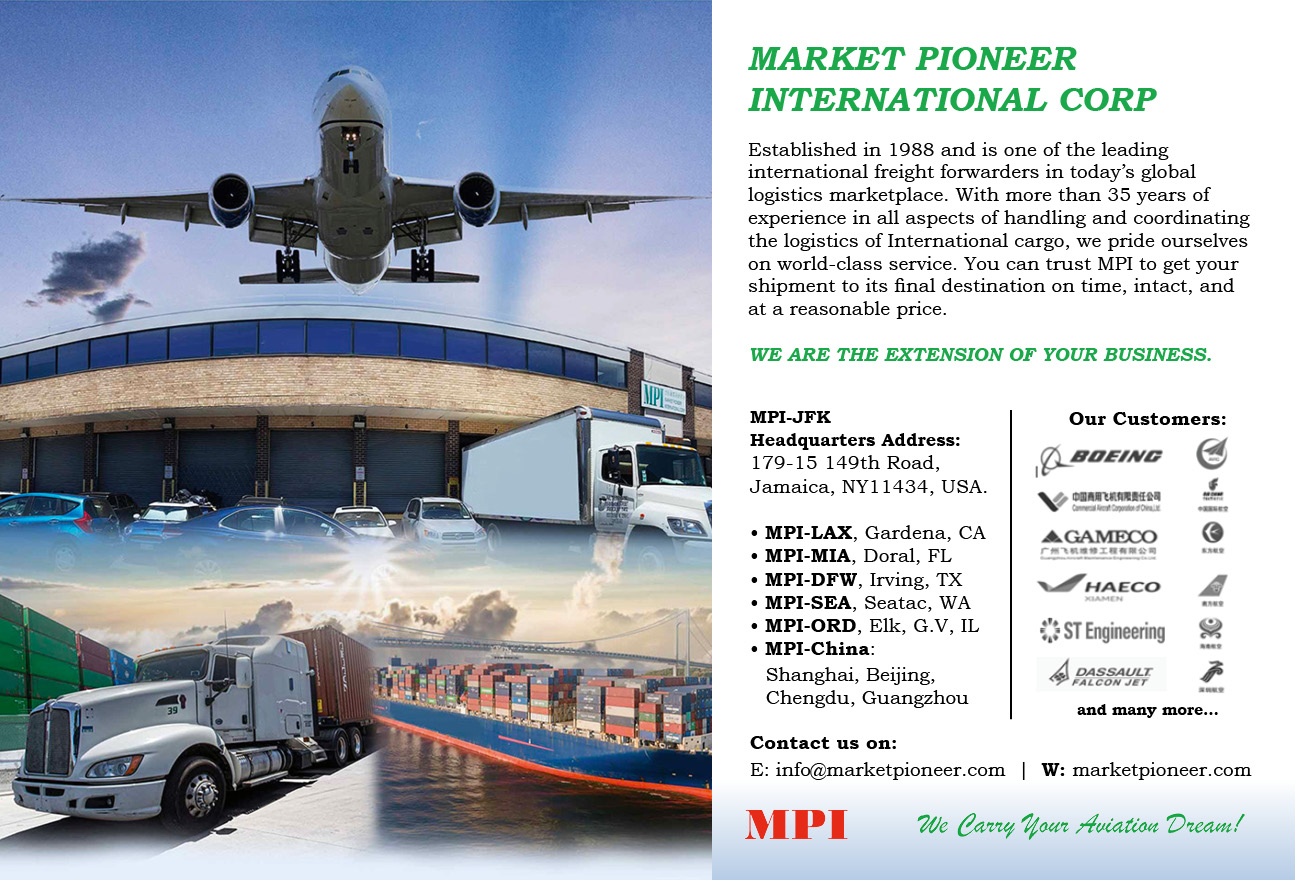 "MPI is proud to be an ExecuJjet Haite global partner. Our goal is to provide the best solutions to customers on complicated import and export processes. Customers are ready to grow and MPI is ready to provide all kinds of support." – Betty Lee, CEO, Market Pioneer International Corp (MPI)
By Chrissie McClatchie
After a decade working in sales and marketing for the luxury industry in the South of France, Chrissie shares her journalism talents with The CEO Magazine.
Related Articles
Inspiring The Business World
The CEO Magazine is more than a business title; it’s a source of information, inspiration and motivation for the world’s most successful leaders, executives, investors and entrepreneurs. Our content creates conversations, our voice is the one that matters.